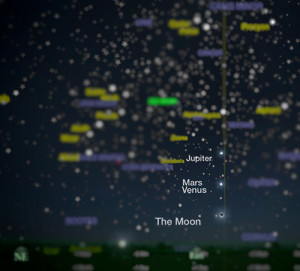 The planets move through the constellations (signs) at various rates.  Moon goes through all twelve signs (constellations) every month.  In other words, it goes all the way around, returning to its starting point every month.  Saturn spends about 2 1/2 years in each sign.  Jupiter… about six months per sign.  All the other planets about one month per sign.

About a month ago, Venus, Mars, Jupiter, and the Moon were all close together visible in the early eastern morning sky.  Venus was above Jupiter, Moon, and Mars. Over the past month, Venus and Mars (because they move through the signs faster than Jupiter) caught up and passed Jupiter.  Moon has gone all the way around through all constellations and has now caught back up with, and passed, Jupiter and is close to Mars and Venus.

So now, in the early morning eastern sky, you can see all four planets close together but with Jupiter above Venus, Mars, and the Moon.  Because Moon moves so quickly, in several days it will have gone way past the other three planets so if you want to see all four together, you need to do so in the next day or so.