In God We Trust

In a recent poll, nearly half of college students said they would like “In God We Trust” taken off of our currency. This, to me, screams out one thing more than any other: The popular understanding of “God” from the past no longer works for the current mentality.

A couple hundred years ago, for most people, spirituality and religion were all about faith. In today’s world, “faith” implies “blind faith.” Today, things need to be based upon logic. If something does not make sense, if something cannot be justified rationally and scientifically, then it is rejected.

With the advent of modern physics, we can make sense of spirituality: There is a unified field—one thing out of which all things emerged—one thing that is the essence of everything. Vedic Knowledge goes deeply into not only the subjective, but also that objective, understanding of spirituality. That is why so many modern physicists (Oppenheimer, Einstein, Heisenberg, Schrodinger, etc.) all honored and studied Vedic science.

In my classes and writings, I include the rational basis of spirituality. It is not a refutation of devotion and heartfelt Bhakti, but rather (particularly in the world today) an essential component of Bhakti. If we want our youth to honor “In God We Trust”, then we need to offer the rational understanding first. Only then will they have a spiritual foundation they can accept.

Of course, the rational component also deepens our understanding and purges spirituality of much superstition and confusion. Spirituality must have two feet to stand upon—Bhakti and Gyan (heart and mind). Each supports, deepens, and moves the other forward.

If college youths compel us to bring out rational spiritual knowledge more clearly and fully, then in the end, they will have done spirituality and the motto “In God We Trust” a great service.

The Law of Karma seems straight forward enough. It is simple cause and effect. For every action, there is an equal but opposite reaction. It’s just elementary, Newtonian physics. We live in a cause and effect world—a world of Karma. However, when we enter the domain of justice, things become quite obscure.

It is interesting to look up the word “justice” in dictionaries. The definitions are rather circular, using words like “righteous,” “moral,” “just,” “divine law,” “moral law,” etc. Merriam Webster suggests moral be described as: “perceptual or psychological rather than tangible or practical in nature or effect.”

I recall a man on the news proclaiming moral justice when a hurricane struck a gay community in south Florida. I recall a woman being mocked on the news when she even suggested that nature delivers moral Karma through acts or events of nature in the physical world. We are all quite aware of ‘justice’ being delivered by the courts in outrageous ‘legal’ ways, from the Salem witch trials to the nightly news.

Is justice really nothing more than, as Miriam Webster suggests, a psychological or perceptual, subjective judgement call? Do facts and reason come in at a distant second place to emotional gut reactions that vary wildly from one generation, one era, one cultural group, one country, and one state to the next? Dare we call that justice?

Can we really say there is Divine justice when we see small children suffer, aircrafts crash with over a hundred on board, and cities demolished by the random assault of a tornado? Can what actually IS be so radically divergent from what we base our lives upon and what we adamantly cling to with our convictions and perspectives?

Is there a direct correlation, a connection, between the physical cause and effect world and the delivery of moral justice? If so, can we even begin to fathom such a principle, and decide for ourselves when justice was served and why?

I dare not presume that I can sway the course of human behavior with my opinion on this matter. Yet, I do believe we can all gain by taking a step back and reflecting on this subject with an ever-broadening vision. As we do so, the mechanics of creation seamlessly merge the complexities of life, both physical and moral, into a very simple, yet profound, principle. Everything is seen to be infinitely integrated, correlated, and coherent. All the pieces of the puzzle do, ultimately, come together.

There is, as theologians and modern physicist alike have claimed, one thing that is the source of everything. All things emerge from and return to that. I liken the principle to water from the ocean becoming rain on the mountain top, and returning via a long tumbling journey down a mountain stream to that ocean. All follow the path of karmic events as we do our best to navigate the waters of life. As our vision broadens, we become ever increasingly free from the clutches that Karma has upon the very nature of our thoughts and emotions.

Innocence and the Whats and Whys of Life

I’ve been asked why the enlightened Gurus of history did not employ the incredible technologies described in Vedic Literature: flying machines, construction beyond modern capabilities, world peace generators, etc., etc. After all, they are enlightened and then should know everything. Right? But let’s ask the question another way: What can we learn about the state of enlightenment from the fact that enlightened Gurus of history never brought forth these Vedic technologies?

It has been said that in the Age of Ignorance (Kali Yuga), enlightened people are kicked around like footballs. There is clearly a limit to what they can do. In Kali Yuga, an enlightened individual is like sunshine on a frigidly cold snowy winter day. The snow does not melt, or melts very little. The grip of the ages is not easily brushed away with the flick of an enlightened individual’s wrist.

Now we can take this simple example and generalize it to gain insight into how our hearts and minds work. We learn not by projecting our notions upon the world. We learn by observing the world and learning from our observations. That is quite common sensical. However, it is actually quite rare. We want things to be the way we believe they are or we think they should be. People usually believe in their indoctrinations more than they believe in anything else. Often, people are unable to accept what is, and adjust accordingly. Rather, they cling to what they have been previously led to believe, and then twist and rationalize away anything that contradicts that. It is a huge step forward in a person’s development when they are able to see past their indoctrinations (conditionings, convictions, perspectives, programming, limitations, beliefs— call it what you will).

However, venturing into the terrain that lies beyond beliefs is a slippery slope. It can lead to militants, rebellion, blind alleys, and oblivion. Moving past one’s limitations responsibly requires reflection, reason, humility, introspection, time, and effort. To do so responsibly requires wisdom. After all, we have built worlds, taken sides, reinforced convictions via ‘education,’ created friendships and alliances, and invested ourselves in those identities, those limitations. We would prefer they not be messed with! Those indoctrinations become who and what we believe, not just about the world, but about ourselves.

Adi Shankara (the great Guru) said that the spiritual path is the path of discernment. In life, we do well to discern our convictions—to separate the wheat from the chaff. We must cultivate the ability to embrace what is valid and evolve past what is not. To discern is not so easy to do. The intellect can justify anything and does. Our beliefs and convictions are heartfelt and not easy to see beyond.

See what is. Then strive to understand what is seen. To truly see is to understand. To see is not just about what lies outside yourself. The ability to see is more about with lies within you. Most project onto what they see, build a case reinforcing that perspective, and call it truth. Few actually perceive what is.

Wisdom is innocence. Innocence is not oblivion. The lack of innocence is oblivion—over-standing, not understanding. Innocence simply means honestly and humbly seeing what is and acting accordingly. That is not so simple. Strive for wisdom. 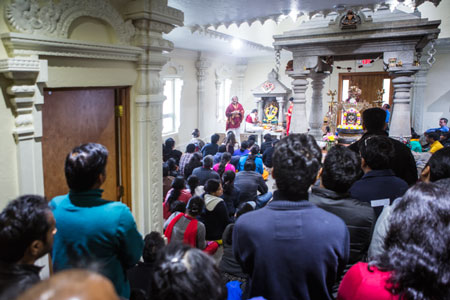 All Vedic knowledge related blog posts that were on this blog have been moved to the new Vedic Knowledge Blog on drmichaelmamas.com.

These blog posts have been placed into the following categories: